On August 23rd a romantic British singer-songwriter James Arthur will perform at Haapsalu Bishop's Castle.Performer of such hits as Impossible, Naked, Say You Won't Let Go, You're Nobody 'til Somebody Loves You, Rewrite The Stars, You Deserve Better, Falling Like The Stars, Empty Space, Recovery, Medicine, Lasting Lover and a row more ones will please our audience with brand new concert program at Haapsalu Bishop's Castle. The special pre-sale for subscribers of Piletipost newsletter (www.piletilevi.ee) will start this Wednesday, January 26th, at 10.00am.The general sales in the entire www.piletilevi.ee network, starting from Friday, January 28th, at 10.00. James has started songwriting since adolescence, but the first recognition came to him with the hit Impossible, winning the 9th season of British X Factor in 2012. The hit soon reached the top of the British chart and remains the most successful winner's single in the show's history.With so much credit for fame and support, many young artists fail to use it with enough determination. This does not apply to Arthur. The following year James released his debut self-titled album, which, in addition to Impossible, includes such singles as You're Nobody 'til Somebody Loves You and Recovery. At the end of 2016 J. Arthur's second album, 'Back From The Edge', is released, which went straight to No.1 in the UK charts and has gone multiplatinum worldwide. It features Say You Won't Let Go, the artist's most successful hit to date, recently officially reaching a billion streams on Spotify. So far only 18 records have achieved a billion mark on Spotify in history, and James is one of 10 artists globally to do this including Drake, Ed Sheeran and Justin Bieber. Rewrite The Stars from 'The Greatest Showman Reimagined', his duet with Anne-Marie recorder in 2018, has been streamed an amazing almost 400 million times. In 2019 James released his third album 'YOU', featuring Naked, Falling Like The Stars, You Deserve Better and Empty Space. The 15-song epic finds the global star at both his boldest and most promiscuous, with hard-hitting lyrics, a restless rifle through musical styles and the searing vocals of someone with plenty to get off their chest. James describes the album material: "I have called the album 'YOU' as unlike 'Back From The Edge' which was autobiographical, my third album is not about me, it’s about YOU.” The last two years James Arthur has spent pretty busy. On September 4th, 2020, the British DJ Sigala released his single Lasting Lover, to which James not only provided his vocal, but also is one of the lyricist. Interesting enough that the list of co-authors and producers also includes the famous Scottish Lewis Capaldi.And then, at the end of last year - on November 5th – the fourth full-size studio LP called 'It'll All Make Sense in the End' was presented to the audience. Arthur told to media that: "there was a definite genre or lane [he] wanted to do, which was mixing rock, guitar-based stuff with trap, hip-hop, and pop".The single Medicine has gained the most acclaim from this album. In total Arthur has now sold over 25 million records globally. His has 22 million monthly listeners on Spotify and has had over 1.5 billion views on You Tube. James Arthur will perform at Haapsalu Bishop's Castle on August 23rd. Tickets on www.piletilevi.ee starting Wednesday, January 26th (Piletipost subscribers only) and Friday, January 28th (general sales). Please note, there also will be fan-bus tickets available starting Wednesday, January 26th. The bus service will provide you a jorney from Tallinn to Haapsalu right for the concert and back after it. Check it:Impossible: https://www.youtube.com/watch?v=Mhj15W23IjA Naked: https://www.youtube.com/watch?v=WXyLdg4mJxo Say You Won't Let Go:: https://www.youtube.com/watch?v=0yW7w8F2TVARewrite The Stars https://www.youtube.com/watch?v=pRfmrE0ToToLasting Lover: https://www.youtube.com/watch?v=wNMZRTROYuw  Join us: https://www.facebook.com/events/403368271587332 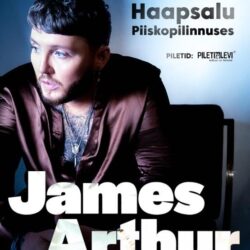